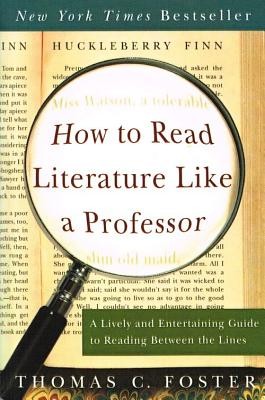 ISBN 9780061804069 is currently Out of Stock Indefinitely and may not be available for purchase.
Available options are listed below:

"I know of no other book that so vividly conveys what it's like to study with a great literature professor."

--James Shapiro, Columbia University, author of Shakespeare and the Jews It is a common situation that is all too familiar to literature professors everywhere. When teaching a great work of literature, be it Lorraine Hansberry's A Raisin in the Sun (1959), Henry Fielding's Tom Jones (1741), or Toni Morrison's Beloved (1987), there is inevitably a moment in the classroom discussion of the book when the students confess to their professor that they do not "get it," they simply do not understand the inherent symbolism represented in the book of which the professor speaks of with such clarity and ease. As Thomas C. Foster states in his enlightening new book How to Read Literature Like a Professor, to the eager but frustrated literature student "it may seem at times as if the professor is either inventing interpretations out of thin air or else performing parlor tricks, a sort of analytical sleight of hand." Of course, literature professors have an obvious unfair advantage over their students: they are experienced readers who over the years have acquired an integral skill that Foster labels the "language of reading," something their students are only just beginning to understand. The "language of reading" is the grammar of literature, a set of conventions and patterns, codes and rules that are employed when dealing with a piece of writing. Quite simply, what does it mean when a fictional character embarks on a journey? Or gets caught in a torrential rainstorm? Or sits down to share a hearty meal with family and friends? In How to Read Literature Like a Professor, Thomas C. Foster presents a lively and entertaining guide for your students to learn the subtle clues that form the "language of reading," thereby transforming their reading experience to a new level that is ultimately more enriching, satisfying, and fun. Written in an informal, friendly style that encourages a freewheeling approach to literature, How to Read Literature Like a Professor focuses on the key literary basics that are the foundation of all great literature: major themes and motifs (seasons, quests, food, politics, geography, weather, vampires, violence, illness, and many more); literary models (Shakespeare's plays, Greek mythology, fairy tales, the Bible); and narrative devices (form, irony, plot, and symbol, among others). Throughout his book, Thomas C. Foster draws upon an eclectic mix of clever examples from all genres: novels, short stories, plays, poems, movies, television, rock and roll song lyrics, and even cartoon favorites such as the noted "literary heroes" Rocky and Bullwinkle and Bugs Bunny and Daffy Duck. To test the growth of the analytical skills of your students, Foster includes as a case study "The Garden Party" by Katherine Mansfield, offering his own incisive narrative comments plus examples of his literature students' impressions of the classic 1922 short story. In addition, Foster also includes a comprehensive list of novels, poems, and plays that your students may find enjoyable and challenging, plus offers suggestions for secondary sources on reading, interpretation, and criticism. In How to Read Literature Like a Professor, your students will come to clearly understand through Thomas C. Foster's witty and instructive style that a journey symbolizes a fictional character's heroic quest for self-knowledge, a torrential rainstorm can be cleansing or destructive to the character but it never just symbolizes that it is raining outside, and a meal may symbolize the religious ritual of the holy communion. How to Read Literature Like a Professor will inspire your literature students to unlock the deeper hidden truths of the literary texts whose many shades of symbolic meaning may initially be escaping their grasp. From page 47 in How to Read Literature Like a Professor "Connect these dots: garden, serpent, plagues, flood, parting of waters, loaves, fishes, forty days, betrayal, denial, slavery and escape, fatted calves, milk and honey. Ever read a book with all these things in them? Guess what? So have your writers. Poets. Playwrights. Screenwriters. Samuel L. Jackson's character in Pulp Fiction, in between all the swearwords (or that one swearword all those times) is a Vesuvius of biblical language, one steady burst of apocalyptic rhetoric and imagery. His linguistic behavior suggests that at some time Quentin Tarantino, the writer-director, was in contact with the Good Book, despite all his Bad Language. Why is that James Dean film called East of Eden? Because the author of the novel on which the film is based, John Steinbeck, knew his book of Genesis. To be east of Eden, as we shall see, is to be in a fallen world, which is the only kind we know and certainly the only kind there could be in a James Dean film."
Show More
Product Format
Product Details
ISBN-13: 9789863592167
ISBN-10: 9863592161
Binding: Paperback or Softback (Trade Paperback (Us))
Content Language: Chinese
More Product Details
Page Count: 384
Carton Quantity: 0
Country of Origin: US
Subject Information
BISAC Categories
Computers | Books & Reading
Computers | Languages - General
Computers | Reference
Accelerated Reader:
Reading Level: 0
Point Value: 0
Guided Reading Level: Not Applicable
Descriptions, Reviews, Etc.
Your Price  $25.20